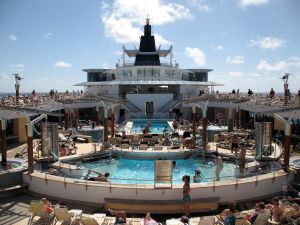 It seems that Cruise Companies decided to change their priorities and their now focusing on even higher Standards based on Higher-Quality onboard Services.

occupancy. But recently they have started to test moves away from that paradigm.

In the latest attempt by cruise lines to break the cycle of last-minute discounting to fill ships, Royal Caribbean Cruises Ltd. Chairman Richard Fain said that starting in March, the company had stopped cutting prices on close-in sailing dates for all of its brands, including Celebrity and Royal Caribbean International.

Last-minute pricing discipline has become increasingly important because cruise lines admit that late discounting undermines their marketing assertions that only by booking early will passengers get the best fares.

“Depending on the type of cruise, that last minute may be 10, 20 or 30 days out,” Fain said in a conference call with Wall Street analysts. “But from that point on, we will hold our price at the prior level.”

Fain’s pledge applies only to North American itineraries and excludes the two- to four-day cruises, where last-minute sales are part of the typical booking dynamic.

Fain conceded that in the short term, it would mean that some RCCL ships would depart less than full. But he said that in the long run, price integrity would boost the brand and lead to higher revenue.

“It was really important to strengthen our brand, because in the long run it is our brand that is going to drive our yield improvements,” Fain said.

In the third quarter of 2013, Carnival Cruise Line adopted a strategy of holding firm on pricing even if its ships sail at slightly lower occupancies.

“We believe this will make Carnival’s pricing recovery more achievable as we move through 2014,” Carnival Corp.’s then-vice chairman, Howard Frank, said at the time.

Other lines, while stopping short of a pledge to halt last-minute discounting, said they have been doing everything possible to persuade customers to book cruises earlier.

“We don’t have a specific pricing promise, but I can absolutely tell you that our goal is to raise pricing as we get closer to sailing,” said Andy Stuart, president of Norwegian Cruise Line. “It’s a philosophy that my boss, Frank Del Rio, has lived by — a strategy of marketing to fill rather than pricing to fill.”

The time could be ripe for such a strategy. One factor driving last-minute discounting has been the glut of capacity in the Caribbean over the past 12 to 18 months. But starting this month, industrywide capacity in the region began to shrink year over year. With some berths shifting to other markets, cruise lines might have a better shot at maintaining a no-discounting model going forward.

“They upset many of our most loyal customers by creating an uncertainty about the prices they pay,” he said. “They cause headaches for our travel agency partners, who don’t know what price they should rely on, and they undermine our brand image.”

Some travel agents have taken note of the philosophy shift at several lines.

“I think Norwegian and Royal are both trying to discount less,” said Debbie Fiorino, senior vice president of CruiseOne/Cruises Inc.

Fiorino said that agencies doing business under the CruiseOne/Cruises Inc. banner have more business on the books for 2016 than they did for 2015 at this point last year, and efforts to encourage early bookings by the cruise lines was one reason.

Other agents said Royal still has room to improve its policy.

“Almost all of our price-drop issues occur in the 30- to 60-day window before sailing, when everyone who booked early is in penalty because that is when Royal is most aggressive,” said Don Baasch, president of Last Call Cruises in the San Francisco Bay area.

Beyond eliminating discounts, several lines said they were taking a variety of steps to encourage early booking. These include announcing itineraries earlier, opening ships for booking further in advance and using yield management to encourage early demand.

“We came out with very aggressive group pricing, which is typically your most advanced cycle of bookings,” Sasso said. “It allows you to be fuller sooner. Then, you come out with an added-value pricing strategy. That has probably become the basis of what most lines are trying to do. So you’re not discounting the price, you’re giving more added value.”

Fain said it is too early to measure the success of the change in close-in discounting practices. But he indicated that the policy is here to stay.

“We think that getting our customers out of this sort of used-car-salesman type of mentality will be good for the brand, good for their experience and therefore lead to larger yields in the long run,” he said.

“While holding near-in price will cause near-term pain, given it is too late for [RCCL] to make up the difference by marketing its 2015 itineraries earlier, we believe this is the appropriate strategy to reinforce the brand image and improve profitability over the long term.”

Patrick Scholes, an analyst with SunTrust Robinson Humphries, said benefits from Royal’s move could be widespread.

“Getting rid of the ‘used-car-salesman mentality’ and eliminating last-minute deals dovetails with [Frank Del Rio’s] New Deal at Norwegian Cruise Line Holdings and could buoy the industry at large,” Scholes said.